The egg is so versatile.  For my steady readers, you know one of my son’s was home from College.  He has been on a kick to learn to cook.  One of the things he has been learning is to make all preparations of the egg.  In a recent post, he learned how to poach an egg.  So this idea was one of the last of the common preparations – the frittata.

This should have been a great learning experience for him but his Skype rang and it was his girlfriend calling from South Africa.  Lesson over but all good.  We will have to try this lesson again on another day. 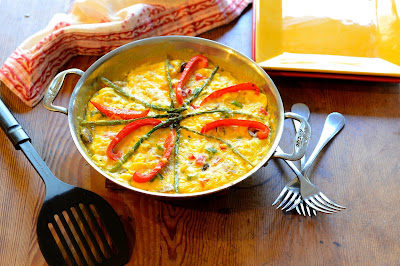 Drizzle the asparagus with the olive oil and bake at 400 degrees for approximately 6 minutes.  I cut the spears in half or so and saved the tops for decorating at the end and diced the ends.  Meanwhile, in a frittata pan, heat the oil and all the vegetables and spices and cook for 5 minutes.  I diced 1/4 of the red pepper and left 6 pieces in long slices and separated the slices after cooking.  Beat the eggs and the milk.  Add the eggs to the vegetables and cook until it is mostly set.  Add most of the cheese and the diced asparagus and cook for another minute.  Top with the remaining cheese, the asparagus spears and the sliced red peppers and move to a 350 degree oven.  Cook for 3 – 4 minutes.  Enjoy!