I have copied a blueberry glaze recipe (sorry, I could not find the source) and wanted to use it.  I decided I would use it to top a cheesecake.  The contrast of the base, with the cheesecake and topping would make a beautiful appearance.  I am much newer to the dessert side of cooking, so I have a lot to learn and a lot of mistakes to learn from.

In this case, I couldn’t get my whip cream to thoroughly combine.  It was suggested to me that I didn’t use a high enough quality of cream cheese.  I do think that I used a general store brand.  I have been told by a couple of wonderful dessert makers that you just can’t substitute on ingredients for desserts the way you can with foods. 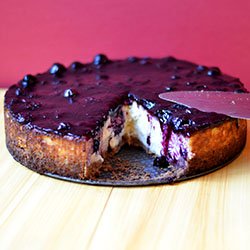