It has been at least 4 weeks since I have smoked any food.  The weather on the weekend had rained for almost one month here in Chicago.  I had my window today.  When I was at the grocery store for my Dirty Rice recipe, there was an unbelievable sale on Chuck pot roast.  I do not believe that I have ever tried to smoke this cut of meat.  But knowing it is a tough, and somewhat, fatty piece of meat, it should be perfect for the smoker.

I was at my BBQ store recently and asked the owner how he prepares his smoker.  The insight was invaluable.  I used to get my grill really hot and then bring down the temperature.  He told me to fill it full of lump coal and warm to only 275 degrees.  Once it gets to that temperature, then bring it down to 225 degrees.  It worked awesomely.  The temperature stayed steady throughout the cooking process.  I cooked the meat for 5 hours.  It tasted so good as is that I called my son downstairs to taste it before I made it into BBQ Beef.

I should quickly mention that I had my parents over last minute.  They are not big fans of smoke so I planned to make this into a BBQ Beef sandwich because the meat is tender and the smoke flavor is not so pronounced. 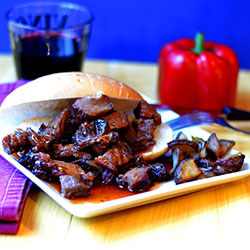